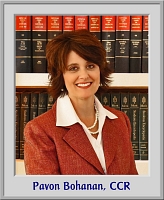 Pavon Bohanan holds state and national certifications as a certified court reporter, obtaining her license in 1995. She was born in Hall County, Georgia and was raised in Metro Atlanta. She married her husband, Jim, in 1996 and worked as a court reporter in Pennsylvania while he was based there as an airline pilot. They were thrilled to relocate their family back to Gainesville, Georgia in 2008 where Pavon immediately continued court reporting full-time over all of northern Georgia and Metro Atlanta.

As Pavon continued to build client relationships, she found that a “true” customer service quality-based agency would be an asset to the legal community and became a founding partner of North Georgia Court Reporting.  Pavon is a 24/7 hands-on managing partner in the firm as well as an official court reporter to the Honorable John G. Breakfield, Hall County State Court. She currently sits as Director on the board of the Georgia Certified Court Reporters Association.